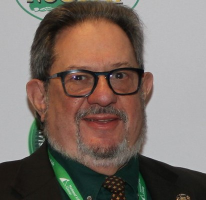 Recently, one of our community’s standouts, Don Ingram, lost his battle with cancer. Don had many facets to his life of 78 years. An accountant by trade, he was a passionate person who carved out time to support various causes. In the 1960’s he and some friends drove south to participate in the Civil Rights movement. He volunteered to assist the Israeli Defense Force during the Six Day War. (Determined to take part, he figured out how to take several flights to get to Israel when the U.S. was not allowing Americans to fly directly there.)

Over the years, several charitable and professional organizations were fortunate to have him aboard. He was an active member of the Plainview Jewish Center, where he served as president. He was a loyal member of the Plainview-Old Bethpage Chamber of Commerce, where he led many committees and served on the board.  After 9/11, he secured a piece of steel from the World Trade Center and was instrumental in having the chamber’s 9/11 memorial built on the grounds of the POB Public Library.

Former Chamber President Francesca Carlow recalls: “During my presidency for the POB Chamber, Don was a trusted advisor and eager to help on many new projects. When bricks for the POB Serenity Garden needed to be replaced, he went to work getting new ones. Every Memorial Day, rain or shine, Don would march in our parade or be at the Plainview-Old Bethpage Town Park with an American flag in hand to show support for our heroes past and present.” (Read Francesca’s entire tribute below)

Professionally, Don got a late start in public accounting and became a CPA.  He was very involved in the National Conference of CPA Practitioners (ncCPAp). He held many executive positions such as President of the Nassau Chapter and as a Director of the Nassau and National Boards.  He was on the executive committee of The Long Island Tax Professional Symposium (now the ATS) and volunteered and supported The Linda Fund.

Personally, Don was a doting husband to his wife of 50 years, Myrna (She passed away two years ago), a caring father to his three children and loving grandfather to both of his granddaughters.  He was also a cherished friend to many. According to his good friend and colleague, Ken Hauptman, “I knew Don for over 30 years, we played golf together and went out with our wives. Recently, at our office at Wild Maney and Resnick, we would have lunch in the kitchen with other members of the firm.  Everyone loved his sense of humor and quick wit that kept us laughing and made for some very interesting road trips to our ncCPAp conferences to Washington DC, Florida, Colorado etc. He will be sorely missed by me and everyone that knew him.”

For over 40 years Don and Myrna Ingram were frequent customers at TRIO Hardware and I grew to know, admire, and respect Don’s fierce commitment to his community and the people he loved. He had a strong sense of right and wrong and wasn’t afraid to argue his point and defend his loyalty.

Almost every morning Don ate breakfast with a group of long-lasting friends at the Blue Angel Diner before heading to his office conveniently nestled inside the Marriott Residence Inn. Many mornings I would join the boys club for a few minutes and have fond memories of his hardy laugh at silly accounting jokes.

Don was a valued Board member of the Plainview- Old Bethpage Chamber of Commerce for many years. When a Dog Park was needed, he volunteered to help secure one. When bricks for the POB Garden needed to be replaced, he went to work getting new ones. Every Memorial Day Parade, rain or shine, Don would march or be at the Plainview Park with an American Flag in his hand to show his support for our hero’s past and present.

Don was a very passionate man and never shy to show his true emotions. In 1998 he marched with 600 protestors waving a “Keep TRIO Hardware Here” placard after the store was destroyed by a devastating fire.

Even when his accounting office was churning through a tough tax season his door was always slightly ajar.  Don volunteered his services and help organized and foster companies in need of professional guidance and sound advice.

During my presidency for the POB Chamber, he was a trusted advisor and eager to help on many new projects. The Carlow family and TRIO Hardware will always remember Don and the many contributions he made to make our community a great place to live, work and play!