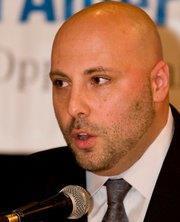 Join us on Wednesday, Sept 22nd for a LUNCH meeting to kick off the fall chamber season! This meeting, (a week later than usual due to the Jewish Holiday), will be held from 12:00pm to 1:30pm, indoors at the Old Bethpage Village Restoration in the Main Entrance building (not the barn) at 1303 Round Swamp Road in Old Bethpage.

Eric Alexander, Vision Long Island Director and LI Main Street Alliance Founder, will be the featured speaker. Beth Levine, Multi Media Promotions and Jay Ryan, Kilfinane Environmental will be the Spotlight Speakers. There will be a charge of $10 for members and $15 for non-members.

Please note: All CDC Covid protocols will be followed.

Eric Alexander is the Director of Vision Long Island, the area’s downtown planning organization. Eric has over twenty five years of experience in housing, transportation, community development and coordinating successful community projects. Specifically, Eric has been a proponent of downtown planning, infrastructure investment and mixed use development through lobbying efforts on Federal, State, County levels while working with municipalities to develop and implement smart growth policies, regulations, and projects.  All told his efforts at Vision Long Island have resulted in acting as a catalyst for well over 150 Smart Growth projects supporting over 15,000 units of Transit Oriented Development across LI.

In 2002 Eric organized Long Island’s first Smart Growth Awards event and led its first Smart Growth Summit. The Summit, now held annually, had over 1,300 attendees before Coronavirus and develops a policy agenda for downtown redevelopment and infrastructure.  Over the last twenty three years Eric has made over 3,500 individual and group presentations in nearly seventy five Long Island communities.

Eric has been advancing policies and regulations to advance Smart Growth principles through active partnership with the 100 member LI Lobby Day Coalition, the LI Smart Growth Working Group, the LI Complete Streets Coalition, Friends of Long Island and the Suffolk Alliance of Chambers of Commerce.  On the Federal & State level he has served on Governor Spitzer’s Transition Team for Smart Growth and served on Congresswoman McCarthy’s Economic Advisory Committee, the NY Congress for the New Urbanism Executive Committee, the Steering Committee of Empire State Future and the Board of the Tri-State Transportation Campaign.  Locally Eric has served on the 2017 Town of Hempstead Transition Team, 2009 Nassau County Transition Team, Town of Huntington Smart Growth Steering Committee, Suffolk County Smart Growth Committee, the Suffolk County Commission for Workforce Housing, the Nassau County Next Generation Housing Committee and the Advisory Board of Salvation Army of Nassau County.  He is a graduate of the Energeia Partnership and Leadership Huntington, served on the Advisory Board for Newsday’s Green Street LI project and the Board of the LI Coalition for the Homeless and the Pink Tie Foundation.

Eric has been listed as one of Long Island’s 100 most influential leaders by the Long Island Business News for three years running and recently was featured on the cover of Corridor magazine. In 2019 he was listed on the Power List for the LI Press. In 2021 he received the Corporate Citizenship Award by the LI Business News.  In 2017 he was given a LI Business News Hall of Fame designation. In 2016 he was honored by the Hollywood Baptist Church for a Martin Luther King Jr. “Leadership” Award, by EHS of LI for a “Social Justice Leaders” Award and in NYC for a “Gotham Green” Award.  In 2015 he was honored by LISTnet for their small business award, In 2014 he was honored by the 100 Black Men of Long Island and received a “Founders Day” Award by the Ethical Humanist Society of Long Island.  In 2013 he was honored with a LI Real Estate “Leadership” Award by the LI Business News, “Long Island Achievement Award” by Public Relations Professionals of Long Island.  He was also honored as “Person of the Year” by Northport Patch in 2012, as a “Leader who makes a Difference” by the Hauppauge Industrial Association in 2011, “Business of the Year” by the Hicksville Chamber of Commerce in 2010, a “Graduate of Distinction” by Leadership Huntington in 2010, sustainable development by the LIPC in 2008, community planning by the American Planning Association NY Chapter in 2008, Businessperson of the Year by the Nassau Council of Chambers of Commerce in 2005, the LI Business News 40 under 40 designation in 2003 and the LI Alliance Kairos Award in 1990.

Locally Eric is a Northport resident and served on the Northport Village Merchants Association Board. In addition he was a volunteer advisor for the Youth Group (YES) of the Ethical Humanist Society of Long Island.  He is married to his wife Liz and raising their daughter Rayne.